John Cooper Furniss was a biscuit and sweet maker. His factory was a significant employer in Truro until the 1980s, when it moved to Redruth, and became ‘Furniss of Cornwall’. Until then, the C19th entrepreneur’s signature product, the ginger fairing, declared itself on its tall cylindrical tins to be ‘Furniss of Truro’. Mr Furniss was one of a long line of manufacturers to underpin Truro’s estuarial economy, from medieval times. The combination of running fresh water keeping the mill wheels turning, and the saline rhythm of the tides bringing cargoes in and out, shaped the town we know today. Whilst internal combustion and electricity have ruled the roost for over a century, we are slowly looking once again towards the sea and rivers to power and connect us as we grapple with climate change.

Mr Furniss was a fair employer and a philanthropist. As well as donating significant sums to build Truro Cathedral, he discreetly provided a royalty on every tin of Tom Trot’s humbugs to the victim of a site accident when Mr Glanville lost both legs as a ‘bosun’s chair’ lift ran away from the western towers and crashed. Mr Furniss died towards the end of the C19th but left both an enduring product and a good business behind.

He also left a legacy of Furniss shares (later converted to Charibonds) to a small municipal charity – known in Truro as ‘Furniss Coal’. The Trustee of the Fund is Truro City Council and it annually gives coal to disadvantaged households within the parish of Truro. Each November advertisements appear advising people to apply to a number of councillor ‘agents’, each assigned to a number of streets. They issue ‘Furniss Tickets’ at their discretion. Whilst demand for coal as a domestic fuel is rapidly reducing, current recipients include both elderly and younger who rely on coal for heat. 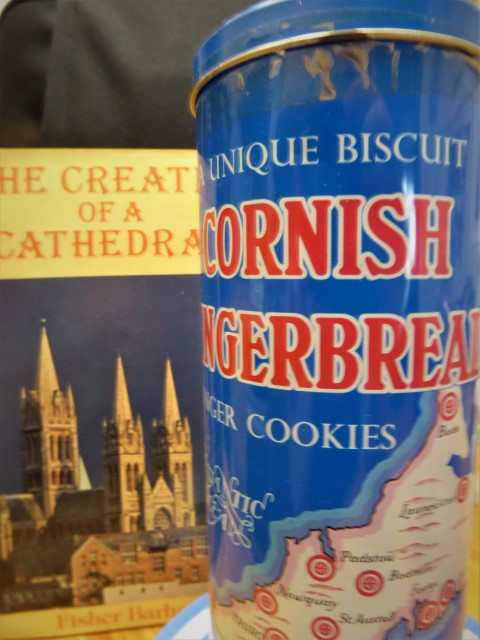 The Trustee has tried on several occasions to alter the charitable deed to enable it to support users of other fuels (eg electricity) but Mr Furniss was a clever man! However, with climate change likely to eventually require a change of law on the domestic use of fossil fuels, the Council is intending to try again.

In the meantime, the Furniss Charity quietly celebrates the industry, philanthropy and common sense of John Cooper Furniss and operates each year. It has enjoyed a long association with Rudrum’s, the coal merchant, since that company purchased the Truro business of Jewell’s, at the end of the C20th. In recent times, since the biscuit company was saved by Proper Cornish Foods of Bodmin, we are glad to enjoy a good relationship with the company, and it sees ‘Furniss Charity’ as part of the cultural influence of the company it has now brought up to be a national brand leader on the biscuit shelves of all major supermarkets. JCF would be quietly smiling if he knew.

The Furniss Charity is a charitable trust offering Truro residents support to help heat their homes during the winter months. To enquire about this support residents need to contact the City Councillor for their district; contact details can be found on the below poster. 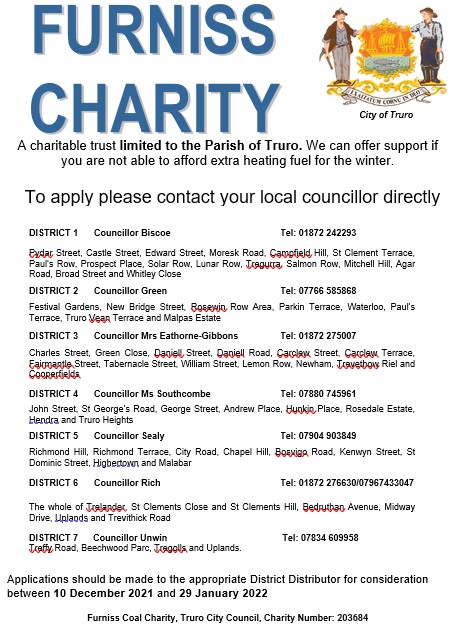